In the comments at Jim’s blog, https://blog.jim.com/war/when-the-rot-set-in-2/ there was some back and forth about suttee/sati – the old Indian practice of a widow being expected to kill herself by throwing herself on her husband’s funeral pyre. 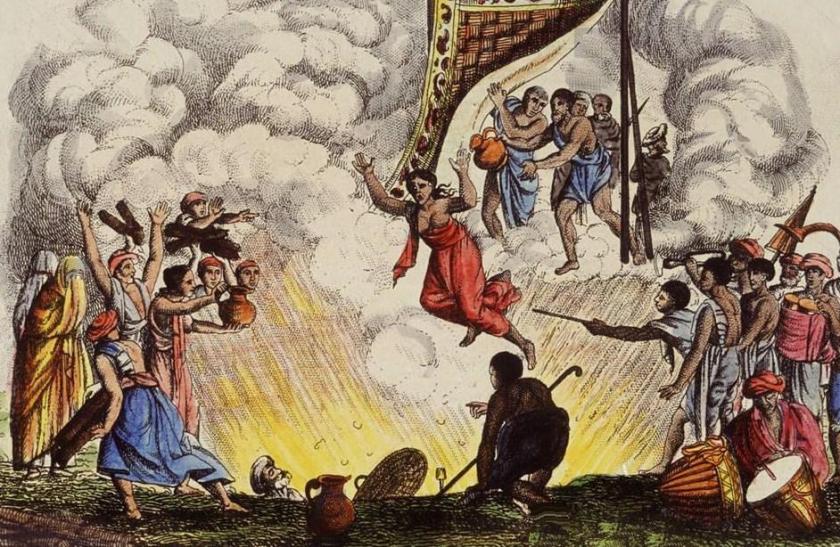 Someone claimed that sati was a reaction to a raft of Indian wives poisoning their husbands, and so sati came about as a deterrent to this, i.e., a deterrent to murder. (I have no idea how credible this assertion is.) Given that, the question was whether the British in India were right to abolish sati, as they apparently did in the 1800s.

A bunch of people weighed in, so overall it went something like this:

Sati is evil and the Brits were right to abolish it.

No, because it came about as a deterrent to murder.

It would be better to just investigate and punish murderers, not throw every widow onto a fire.

The detective tech of the time didn’t exactly have fingerprinting, etc. Also, the widows weren’t thrown onto the fire; they were merely expected to do so themselves. [Or what? They’d “live in dishonor” or something? What’s the semantic content of “expected to” here? – N.]

Also, Chesterton’s Fence says we shouldn’t mess with customs like this that we don’t understand.

That’s not all, but let me stop here. Chesterton’s Fence is an important concept; we can’t abuse it to justify literally anything. Indeed Chesterton himself didn’t advocate that:

Note that in some circumstances “I may allow you to destroy it.” That’s important. Chesterton’s Fence was not put forth even by Chesterton as an argument that no one should change anything ever.

So how can we tell the difference?

For one thing, we could just ask around. Why not just ask Indians why the practice of sati exists? If they say “Because of a wave of husband poisonings,” that’s a start.

And if a widow was not expected to kill herself when the husband died of non-poisoning causes – e.g., everyone saw him absent-mindedly walk off a cliff – that buttresses the “deter poisonings” argument.

And are there alternatives? Someone conjectured that women were killing their husbands because they wanted to “trade up” to a new husband. If that’s the case, then forbidding widows from re-marrying would be an effective deterrent. You don’t have to immolate them!

And what about experimentation? Forbid sati. If there’s a sudden wave of husband poisonings, then re-establish it.

In contrast, “patriarchy” passes the universality test: Every society in the history of the world kept women out of important social decision-making until around 1900. That is an overpowering argument that when women make such decisions, things go badly wrong. In the U.S., for example, it is women who vote overwhelmingly for the political party that is importing as many hostile invaders as possible. (And many of those invaders are from extremely anti-feminist societies and show no inclination whatsoever to assimilate, which conveys some of the self-destructive nature of feminism, and of societies in which feminist notions are allowed to become important.) The society that allows this is either going to stop allowing it or stop existing. We are seeing this in real time every time we see video footage of invaders crashing our border. So there is an unassailable Darwinian argument here.

In contrast, not every society sprayed lighter fluid on bereaved wives and tossed them onto a pyre.

Of course there are several good reasons not to intervene in other cultures. Like: We have 6,000 problems of our own to solve before we even contemplate running around trying to solve everyone else’s problems! But that’s a different argument.

Why does the title of this post mention holiness spirals? Because that’s another reason that people do seemingly insane things: Because those things are in fact insane, and those who do them are caught up in a holiness spiral.

I recently saw a photo on the Net of a white woman holding up a placard that said “Kill all white people.” This is not because this is a sane idea. It’s because she’s a mentally vulnerable person in a society undergoing a severe holiness spiral. One can imagine the same thing with women expected to immolate themselves. Indeed, when it came to the horror of Moloch, the baby-eating god of the Canaanites, that’s clearly what was going on. Or do you really think that most parents wanted to sacrifice their first-born children? Bitch, please. Sometimes people really are caught up, against their will, in collective-action madness.

So: Chesterton’s Fence is a thing, but so are holiness spirals. And so is the Emperor’s new clothes. (Everyone wants to say, “Let’s not kill our kids!” but everyone is afraid that something horrible will happen to them if they say it… because everyone else wants to demonstrate their loyalty to Moloch (ugh) by attacking those who question Moloch… And they want to do this not because they really are loyal to Moloch, but because they fear they’ll be attacked if they don’t demonstrate loyalty…)

We should not be messing around in other cultures, but a much better rationale for that position is that we have problems – emergencies – of our own to deal with. Maybe someday all our problems will be solved (snort). But in the current age we don’t have the time or resources for extra-curriculars.

Stuff, in no particular order: